Sarah Alpar has responded to Jake Paul’s generous contribution to her GoFundMePage.

The YouTuber-turned-boxer showed his support this week by donating 5K USD to the UFC flyweight’s campaign.

Fighter pay is a recurring issue in combat sports and Jake Paul has often said that he thinks UFC athletes are underpaid.

The 9-5 fighter launched her GoFundMe last week due to struggles in paying for her training camp. She posted an instagram video and explained her plight by saying,

“I want to go so far in the UFC, and I cannot do it without you and my ‘Too Sweet’ tribe.”

In response to Paul’s donation, Alpar posted an instagram story that read,

“How did I deserve this graciousness?” 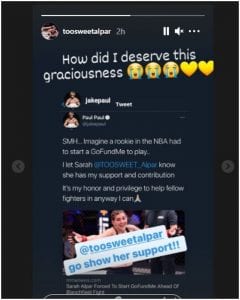 The 30 year old also expressed her gratitude on the What the Heck podcast and said,

“I got this message and it was this person that I saw a little check mark, and it said, ‘Jake Paul sent you a message. I was like, ‘What? You know my existence?’”

Following on from Paul’s donation, a ‘Lisa Ferguson’ contributed a whopping 25K USD to help ‘Too Sweet’ smash through her December 1st target of 30K USD. At the time of writing, the page’s total stands at $34,781. Triller Fight Club have since claimed that they were the ones behind the donation from Ferguson.

Having reached her goal, Alpar posted a thank you video on her page with a new goal.

Dang!! We met and exceeded the July 1st goal, and before I posted a video update with a new goal, y’all exceeded that!!

Thank you, everyone, for showing up and supporting me!! I can’t wait to get back in the @ufc Octagon on September 18th. Your financial support is helping me train more and put my best fist forward. Who’s ready to watch me play punchy face again?! I love you all and am filled with so much gratitude. Our new July 1st goal is $3,500. I believe in me, and I believe in all of you. Let’s make this happen, team!!”

Like many fighters, Alpar’s livelihood suffered during the pandemic and she’s seen four fights get cancelled in the last two years. In her conversation with Heck, she explained her situation by saying,

“Just being a fighter in general, you don’t get paid anything leading up, like the other organizations … we’re making pennies, and that’s compared to what UFC gives us.” 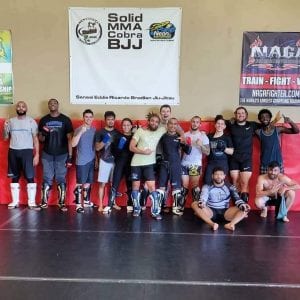 “I don’t have anything on UFC. I got in there and tried to fight, and this happens and that happens. It’s just business. They’ve given me more than any other organization has. I can’t attack them for anything. It’s not their fault that [opponent] Stephanie [Egger] got COVID and couldn’t fight. They tried to find me somebody. I don’t blame them for my situation, I’m just in the situation that I’m in. It is what it is. But I’m trying the best I can, and I want to do great big things and I want to be a role model and I love to fight. So this is what I chose, and I asked for some help,” she continued.

In many respects, the situation with Alpar is part of a wider conversation. Both Triller and Paul have engaged in a war of words with Dana White in the past, and the 3-0 star took another shot at the UFC boss on twitter by saying,

“SMH… Imagine a rookie in the NBA had to start a GoFundMe to play.. I let Sarah @TOOSWEET_Alpar know she has my support and contribution. It’s my honor and privilege to help fellow fighters in anyway I can.”

SMH… Imagine a rookie in the NBA had to start a GoFundMe to play..

I let Sarah @TOOSWEET_Alpar know she has my support and contribution

It’s my honor and privilege to help fellow fighters in anyway I can🙏🏼https://t.co/XvDHOwoN6Q

Do you agree with Jake Paul?

By admin
31 mins ago

Dan Hooker on Islam Makhachev fight at UFC 267: “This is his party. I’m just here to spoil it” –

We Got Next: Modestas Bukauskas, David Onama, and Themba Gorimbo

Vorontsevich rolled back the years for UNICS – News